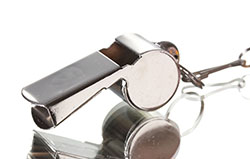 Many people reach out to us because they discover that their employer is engaging in illegal conduct. We understand that most people want to do the right thing and report the illegality, but are concerned that their employer will retaliate against them for having the courage to speak up, or “blow the whistle.” Fortunately, there are laws that protect employees from such retaliation.

The most important of these laws is called the False Claims Act. President Lincoln signed the Act into law in 1862 in response to unscrupulous wartime defense contractors who sold the Union Army diseased horses and mules, defective weapons and ammunition, and rancid rations and provisions, among other things.

The critical provisions of the False Claims Act for whistleblowers are known as the qui tam provisions, which are aimed at rewarding and protecting people who come forward with information about fraud perpetrated against the government. The qui tam provisions allow any person, known as a “relator,” to file a False Claims Act lawsuit on behalf of the United States government, and to receive a portion of any amount the government recovers from the wrongdoer.

The government must investigate all whistleblower claims and can either “intervene” and take over the case or decline, in which case the whistleblower may still proceed with the lawsuit. Regardless of the outcome of the qui tam action, the False Claims Act protects relators from retaliation—such as demotion, harassment, or termination—for blowing the whistle.

Congress amended the False Claims Act in 1986 to make it easier for people to bring lawsuits under the qui tam provisions, and to increase rewards for whistleblowers to 15-30 percent of the funds recovered from wrongdoers. Since the 1986 amendments, the U.S. government has recovered over $48 billion under the False Claims Act, with $33 billion coming from qui tam whistleblower cases.

In the last decade alone, whistleblowers who reported fraud under the False Claims Act have received over $1,600,000,000 in reward money.

Our firm can help you enforce your rights and recover reward money under the False Claims Act in various cases involving government fraud, including:

We work these kinds of cases under contingent fee arrangements, which means you owe us nothing unless we are able to recover money for you.

To learn more about your rights, we encourage you to review our Whistleblower Rights FAQ page, and to speak with one of our attorneys. You can call us at 612.486.5540, or use our contact form to request a free case evaluation. Your privacy is important to us, and we promise to treat any information we receive as strictly confidential.

Bristol-Myers Squibb (“BMS”) is a drug company, and for years it paid doctors and other health care providers illegal kickbacks to induce them to purchase drugs it produced, which resulted in the submission of false and fraudulent charges to federal health care programs such as Medicare and Medicaid. Additionally, BMS fraudulently inflated the cost of a drug used to reduce the side effects of cancer treatments without regard to the increased cost of government health care programs for elderly and indigent patients. Finally, BMS fraudulently marketed an anti-psychotic drug as being suitable for pediatric use and misreported its best price for an anti-depression drug in violation of Medicaid.

Several whistleblowers filed qui tam lawsuits under the False Claims Act against Bristol-Myers Squibb for its fraudulent conduct. The government recovered over $515 million, and the whistleblowers were rewarded $50 million for coming forward with information about the fraud.